Officially unveiled by The Princess Royal last Friday, the new stand at Cheltenham Racecourse is now officially open to the public. I was down for the Saturday and Sunday of the Paddy Power Open last weekend and here is my view

Costing £45million and taking just 19 months to construct and complete the stand is impressive as you walk into the course. Even more impressive is the fact that Cheltenham has remained open to the public in that same period with no meet cancellations as a result of the stellar new facilities’ development.

Although by global comparison, the new grandstand isn’t the biggest in the world, it is firmly positioning itself as the best sporting hospitality complex in the country. 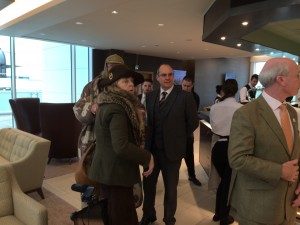 I was lucky enough to be shown around the new stand by Cheltenham boss Ian Renton and John McCririck on Sunday. The 500,000 man hours spent on site developing the grandstand has resulted in a complex that boasts a champagne bar, art owners and trainers area, 11 private boxes, 156 new toilets, the Royal Box and 11 additional private boxes.

This isn’t forgetting the Vestey Bar and the Cotswold and Cheltenham Club’s respectively.

As you can see from the picture above I was very impressed with the Cheltenham Club, the privilege of enjoying club membership for the 16 race days per year currently stands at £5,500-a-year with a four-course lunch provided each time in association with tea and a drink upon arrival. I am sure the 250 places will soon be gone for the coming year, as it was without doubt one of the nicest places to watch racing that I have ever seen.

The grandstand also includes 4,500 square metres of balcony space that wraps around the facility offering unmatched views across the racecourse where a new 100 square metre Parade Ring screen – the biggest in the UK – dominates the space.

With the redevelopment area scaling 40,000 square metres at large, managing director at the racecourse, Ian Renton claimed: “It’s amazing. The racecourse team together with the contractors have done a fantastic job in not only building the stand in 19 months but also opening the site every race day for the past season.”

What’s more, Cheltenham Racecourse had further means to celebrate lately with bumper crowds visiting for The Open on both Friday 13th and Saturday 14th November with a new record gate of 36,000 on Day Two.

Day 3 is the calm before the storm at Cheltenham races, with two main races...

Well what a start to the Grand National Festival 2016 today with Cue Card storming home as I had...